Resolution #6 – Forget last year, general increases and the “what have you done for me lately merit increase” approach and refocus individual compensation adjustments on what people should be paid now based on the job and their performance.

Back in the old days, there was something called the “free market.”  People were paid for the things they did – whether it was providing a service or a product – and if they didn’t like what they were offered, they took their business elsewhere and found another customer.  Then came the industrial revolution, and instead of everybody working for themselves, people started working for employers.  All concerns about robber barons and oppressors of the workers aside, something else happened – instead of being a negotiated fair exchange of labor for pay, employers offered a “take it or leave it” system of compensation.  For a long time, this actually worked, usually because much of the work being performed was a commodity, something that Frederick Taylor would go on to immortalize in “scientific management.”

We are in a different world today, in an economy where work is not really interchangeable any more.  There is more of a need for skilled trades than non-skilled labor, each organization has a twist on what used to be considered straight-forward work, and even functions like accounting and human resources are more specialized and vary dramatically from industry to industry.  What employers haven’t caught onto yet is that people are starting to look at themselves like the ancient craftsmen again – they don’t have to stay at one employer for life, and they don’t have to tolerate being treated, or paid poorly.  Surveys continually show that a quarter to a third of employees, particularly younger employees, plan on leaving their employers, even if they feel well paid.

Faced with the fact that people are interested in more now, compensation programs need to adapt, and quickly.  We have to get rid of general increase approaches, and merit matrices that don’t work, and move to pay aligned with the growth and development curve of each employee.  Instead of being linear (which is what a business would prefer), we have to think in terms of growth curves: 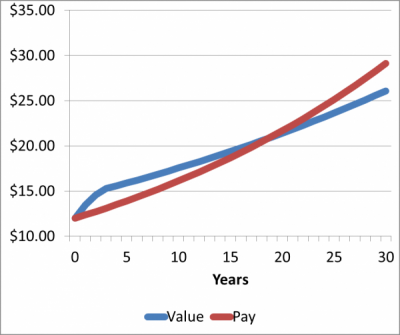 The “pay curve” of a traditional compensation program will simply not work any more.  Employees grow quickly in their jobs – both in their ability to achieve their objectives, and in their value in the market.  Years 2 through 5 are when most pay-related turnover takes place, and looking at the curve, it’s no surprise.  If you have a pay program with a “market median” pay philosophy, during years 2 through 5 you’re probably paying at about the 25th percentile of the employees’ market value.

The process of paying on a curve is not rocket science – but it requires a big change in perspective.  Last year’s pay doesn’t matter — it isn’t even slightly relevant.  It isn’t about the increase, it’s about the present value.   Employers need to lose their horror at the thought of double-digit percentage increases – remember, a big percentage on a small number isn’t that big of a deal.  By keeping pay on the curve, organizations will be pro-active instead of reactive, reducing their pay-related turnover, improving employee engagement and fostering an environment where employees feel they are really valued.