Well not all of it, of course.  Most of it, along with the other anti-discrimination laws, are crucial to fighting intentional discrimination.  However, one particularly nagging part of the Equal Pay Act actually enshrines “unintentional” discrimination.  It is all in 29 USC Section 206(d)1, a sentence that starts out really well by banning discrimination, but then gives the following “out”:

…except where such payment is made pursuant to (i) a seniority system; (ii) a merit system; (iii) a system which measures earnings by quantity or quality of production; or (iv) a differential based on any other factor other than sex.

Here’s the problem, in statutory order:

1.  A (i) seniority system, by definition, pays people based solely on how long they have managed to stay employed.  Seniority systems are inherently discriminatory when any group of people will tend to have less seniority than others, e.g., when women take time out of the workforce to care for children.  This might actually be okay if in fact there was any connection whatsoever between the length of time someone works and the value of their work.  The truth is that once the job is learned, all the extra years are just repetition, and you can only get so much better with practice.  Perhaps in the first few years on the job it can be argued that seniority has meaning, while people are learning the job.  After a while, however, it just doesn’t cut it.  Can anyone seriously argue that someone who has been working at a job for 18 years has any more “value” than someone who has been working in the job for 15 years?  The answer, of course, is no.  How, then can we justify paying one group of people less, when they provide the same value?

2.  A (ii) merit system, unless designed correctly (which few are) does no better than a seniority system at paying based on the value of the work being performed.  I have addressed this, ad nauseum, in a post earlier today.

3. (iv) any factor other than sex encompasses a lot of excuses, but is primarily the avenue used to allow discrimination based on historic market practices.  Again, this has been addressed at length in a post specific to the issue.

Articles attacking the existence of the gender pay gap correctly point out that many of the causes  of the gap are not deliberate discrimination, and they cite, specifically, factors relating to these exceptions as being the primary causes of it.  It seems paradoxical to say that we should be able to accept this problem simply because decades ago legislators did not have the foresight to see that the exceptions that they thought were beneficial would actually become problematic.  They solved one problem, and created another.

The reality is that these methods, particularly seniority and the typical merit system, are just easy to do.  They are perceived as fair because the intent seems innocuous enough.  In application, however, they may be the biggest barriers to bridging the gap between the pay of men and women.   Management has all the tools it needs to ensure that employees are paid based on the value of their contributions to their organizations — and if managers truly want to be “employers of choice,” they might want to consider that devaluing the importance of half their current and potential work force might not be the way to achieve that goal. 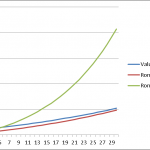 The Decline and Fall of “Pay for Performance”